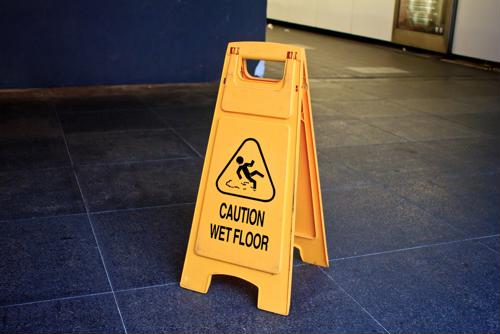 There are plenty of hazards in any industrial setting, but one that remains a persistent problem for companies is the risk of slipping or tripping. The problem, of course, is that this is a slippery issue that can crop up no matter what preventive measures you take. As such, it requires more knowledge of what the risk factors are, rather than trying to find a set-it-and-forget-it policy.

The following are some of the biggest hazards that lead to slipping and falling in any warehouse setting:

Anyone can stumble over large items left in the middle of an aisle or corridor, but often it's smaller items that aren't easily detected that pose a bigger problem, according to Toyota Material Handling of Northern California. These might include tiny pieces of wood that break off from a pallet or bits of cardboard from boxes that, if stepped on, can cause people to lose traction.

Along similar lines, even a thin layer of dust on a smooth floor can be a slipping hazard for those wearing smooth-bottomed footwear, Toyota Material Handling added. This is often found with certain kinds of dress shoes, so it's important for workers who might have that kind of footwear in your facility to be extra careful.

While a small puddle might not seem like a big deal, it certainly can be in specific situations, according to Certify Me. For example, puddles from tracked-in snow and ice during the winter can be a big risk, and that's also true of any slippery or viscous fluids like oil. As such, workers have to be vigilant about sidestepping these hazards and cleaning them up when spotted should be a priority.

When areas of your warehouse aren't particularly well-lit, some workers may have difficulty seeing potential slipping hazards and are therefore at greater risk for an injury, Certify Me said. Luckily, the solution for this problem is simple: Go through your warehouse and make sure every square inch is brightly lit, even if that means installing extra lamps.

Your building likely has at least a few mats and rugs that aren't attached to the floor, and these can be a risk of their own if they're not secured or weighted properly, according to the Centers for Disease Control and Prevention. It's always important to take note of when corners are coming up and either fix or replace them as soon as possible.

Finally, it's vital to understand that slip-and-fall risks can arise at a moment's notice, and if one or more workers are trailing another, the first person can drop a new risk directly in their paths, the CDC advised. For that reason, it's wise for workers to always pay attention to the task at hand so they can react to a new hazard the second it happens.